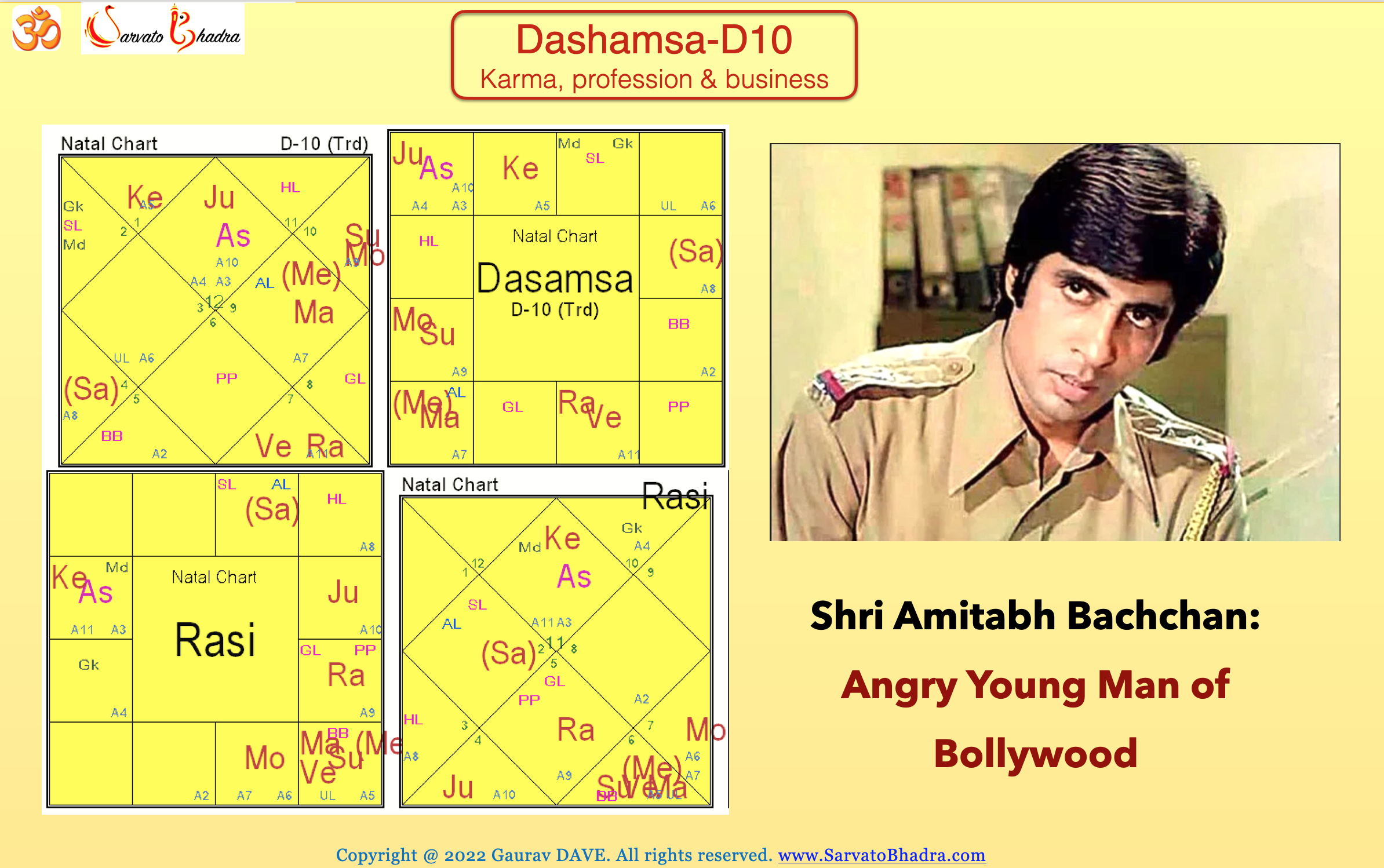 When we repeatedly do similar actions over a period of time, the world gets to notice and Identify us with some patterns. Consequently, people acknowledge us as a personality having some specific attributes, characteristics, and traits. If we touch the emotions and sentiments of people in a positive sense, contribute to their goals and wellbeing, the masses like us, and we become famous as well. People even accord us some titles & names based on their overall experience with our actions and representation. The career of Mr. Amitabh Bachchan is a telling example of this.

During the 70s and 80s, in his youth, Mr. Amitabh Bachchan did a variety of roles in Bollywood movies where he played characters of young dynamic individuals who were unhappy with the unjust system and unfair practices of the Indian society. His characters were courageous and fiery individuals who revolts & fights against corruption and unfair practices of the rich and powerful, helping the weak & poor to get justice and/or alleviate their sufferings and troubles. The means used were sometimes legitimate sometimes illegitimate in reference to the books of law but were mostly correct for the general welfare of the poor and underprivileged. Especially, considering the prevailing unjust circumstances of society and the immense suffering of impoverished people.

This article gives the Jyotish explanation of how he kick-started, why he was famous as Angry Young Man, and why he is so successful throughout his career.

First of all, Mr. Bachhan did all these acts professionally on screen and in cinema. So all these roles were directly associated with his profession, work, and career.

Hence the role of the Dashamsa chart becomes crucial in this analysis. 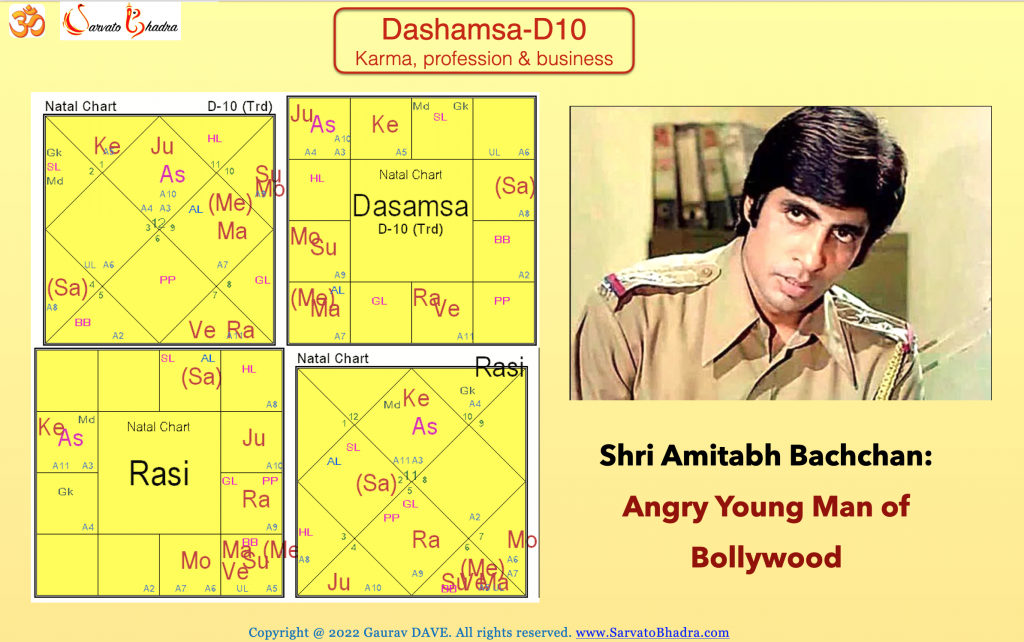 The material image exhibited via work and profession is through Arudha Lagna in the Dashamsa chart (D10).

Mars represents anger, leadership, courage and among many things, Mercury represents acting and communication. Both the planets represent a young person.

Jupiter is a planet that represents law, justice, rights and responsibilities is also aspecting the Arudha Lagna by Rasi Drishti.

Considering all these influences together; the Arudha Lagna is in a fire sign, Mars along with Mercury is present with the Arudha Lagna and Jupiter aspects the sign giving him the image of Angry Young Man for Justice in the work environment. This title is still associated with Mr. Amitabh Bachchan.

Now let me elaborate on his glorious and successful career via Raj Yoga and Vipreet Raj Yogas.

Raj Yogas accord high status, name, fame, authority, success, influence, posts, prosperity, wealth, following, etc. These Yogas are formed between quadrant and trine house lords. If they are formed in the quadrant and/or trine houses then they are much more powerful.

In the D10 chart of Mr. Amitabh Bachchan, we can see that the Ascendant rising is Pisces, the lord Jupiter is strong and well placed in Dig Bala. Making him wise & knowledgeable in work. Native is focused on his existence and his achievements.
Next, we can see that the 4th and 7th lord Mercury is with the 9th lord Mars. As quadrant and trine house lords are conjoined or in yuti yoga that is why it is a Raj Yoga.

Next, we observe that Mars, the 9th lord is placed in the 10th house in Dig Bala in a friendly sign, which means very strong leadership in karma, guided by dharma (9th H) as a leader of people.

Further, we also find that there is a Yoga between Mars and Jupiter.
This may sound strange to some and they would want to question, how.

At best we are trained to identify 3 types of yogas: parivartana or exchange yoga, yuti or conjunction yoga, and Drishti yoga based on the complete Graha Drishti of two planets on each other. However, there is a 4th type of yoga, often missed in Jyotish. It is formed when one planet aspects his dispositor via complete Graha Drishti.

In the Dashamsa chart of Mr. Amitabh Bachchan, Mars is placed in the sign of Jupiter ( Sagittarius) and is aspecting Jupiter in the sign Pisces with the 4th house complete Graha Drishti of Mars. Hence Mars is forming a Yoga with Jupiter. Therefore the 1st, 10th, and 9th house lords are in Yoga. There is Dharm Karma Adhipati Yoga in the Dashamsa chart.

In conclusion, all 4 quadrant house lords (Jupiter and Mercury) are in Yoga with the most powerful trine, the 9th house lorded by Mars. This makes this chart extremely outstanding with a multitude of Raj Yogas.

Vipreet Raj Yoga generates results of initial suffering, failure, and disappointments to the native but later benefits/gain on the loss, misery, or death of others. It is formed when the lords of inauspicious houses (6,8,12) form a union, preferably in these houses only. This Yoga is especially beneficial when it occurs in Dusht Sthana (6,8 or 12th house) from Ascendant.

Many of the movies Mr. Bachchan did in the early years of his career were first offered to other popular and famous actors, who refused to do these roles, considering the risk involved with them. Finally, when the most popular actors were not available to perform, Mr. Bachchan was chosen and fortunately, he did fabulously well.

The Angry Young Man of Bollywood who grew with Vipreet Raj Yogas created his mark with his powerful Arduha Lagna, still continues strong by the grace of his Raj Yogas. May Mr. Amitabh Bachchan continue to entertain us with his delightful acting and personality.