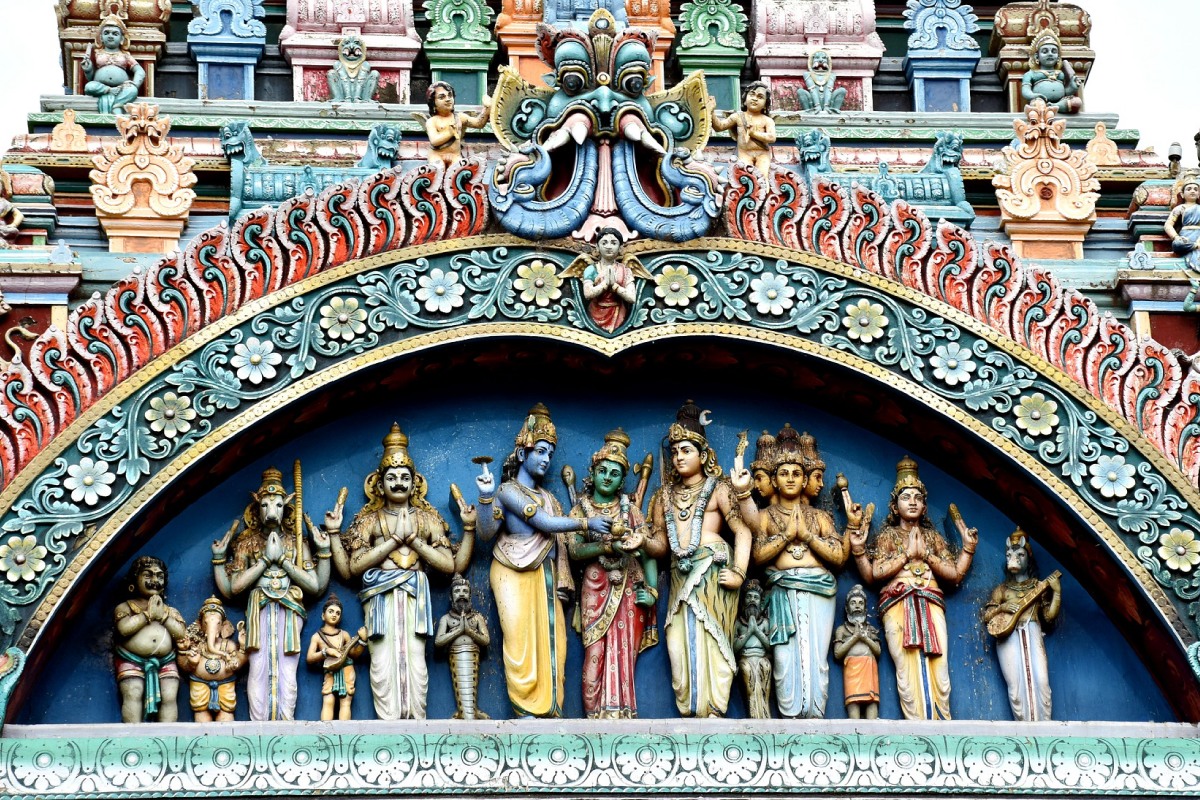 Char Karaka are variable soul-level significators who govern our spiritual existence in this world. They vary from person to person and are ruled by Shri Vishnu for our sustenance.

The reason for our existence is to experience the Maya, do some karmas, learn, grow spiritually, discover the truth and finally attain Nirvana.

Char Karaka are 8 in number for living beings, from Sun to Rahu. For analysis of a human being, 7 types of relationships are described at the soul level in Vedic astrology in this scheme.

The planet having the highest degrees in the chart is called Atma Karaka (AK), the significator of the soul of the native. Atma Karaka is self and is considered the king in the horoscope.

8 Char Karaka, planets having traversed various degrees in signs from highest to lowest in the descending order are as follows:

Here we measure the distance (degrees) a planet has crossed in a sign. As we know, Rahu moves in the opposite direction to that of Sun & Moon so we measure his degrees by reducing from 30° to find his progressed distance in a sign.

For example, If Sun is AK in a birth chart then the soul is attached to the attitude of the Sun. Sun is a king, has leadership qualities, likes to give orders, has egos, and likes to rule. So is the native kingly at the soul level.

The Atma Karaka (AK) planet gives us a sense of independent identity, which we need to shed to attain Moksha. We first need to give up our limited self-identity in order to comprehend our Infinite identity and then merge back in that Divine Supreme or God. We are all Shiva in a dormant state, trapped in Maya, and are unaware of our true selves.

Let us take different scenarios and understand the functioning and usage of Char Karaka in Jyotish.

Amatya means Minister, one who assists and helps a king (Atma: Self) in all his Karmas or undertakings. This Char Karaka is crucial for work.

Mercury being a minister or Amatya Karaka, helps a native set realistic goals, make the right decisions, execute and control strategies and finally achieve or have operation success while considering practical realities of any environment.

Mercury does not believe in hierarchies, he has no emotions, has no egos or anger problems, nor he has any inabilities rather he is most friendly, skilled, a great adapter, and a quick learner. He does not have very high ethical/purity issues nor personally, he likes to cheat anyone.

He is just focused on solid realistic accomplishments, success, and growth. He lords the 3rd and 6th house, among 4 Upchaya houses in the chart of Kaal Purusha.

Mercury is a Bhu tatwa Graha (represents earth element), who rules Karana or achievements in Panchanga. He rules the sportive spirit of a man and is strong in the day and in the night.

People having Mercury as Amatya Karaka have a very pragmatic approach in life, they have solid operational abilities and hence are great achievers in modern-day scenarios in KaliYuga. This planet influences the natives to work like Mercury, so business, middleman-trading work, communication, accounting, statistics, product management, acting, fun-filled entertainment kinds of work naturally suit these natives.

They can identify the right person who can help them or contribute to their goals and they leave no stones unturned to realize success in their Karmas then.

In modern-day scenarios, their performance and accomplishments in the corporate sector or business are simply outstanding.

Shri Amitabh Bachchan and Shri Dhirubhai Ambani have Mercury as their Amatya Karaka.

2. Atma Karaka (AK) and Bhratra Karaka (BK): An individual Soul and his Guru

Atma Karaka (AK) and Brathra Karaka ( BK) if placed in Quadrants from each other in the natal chart is a great blessing. The person learns constructively from his Guru and the Guru also puts effort to teach this student for long. In general Char Karaka placed in quadrant and trines from each other are good placements.

There are few exceptions though for the above-stated generalized rule for planets like Venus, Mars, and Saturn as Atma Karaka (AK).

Any Planet placed in 4th H from Venus is its Vedhak and Venus considers him as his enemy, so this BK placement is undesirable if Venus is AK.

Also if Mars is AK then placement of BK in the 7th H from it is not good because it is the Marana Karaka Sthana (MKS) from Mars.

If Saturn is AK then the placement of BK in the same house or 1st House is also not desirable, it is Marana Karaka Sthana (MKS) from Saturn.

Example: Swami Vivekananda has Sun as Atma Karaka (AK) and Saturn as Bhratr Karaka (BK). Sun is placed in Lagna and Saturn is placed in the 10th house. They are in the quadrant from each other, it shows active constructive efforts from both sides. We know that Sun and Saturn are natural enemies, so there was a rift between him and his guru Shri Ramakrishna Paramahansa initially. His guru compelled him for many things against his wish, including to renounce (not to get married).
Gradually with time, their relationship smoothened a lot and both did active contributions for each other.

3. When Sun is Atma Karaka and other Char Karaka are ill-placed from him:

For people having Sun as Atma Karaka (AK), placement of other Char Karaks (planets) in the 12th house and 6th house from Sun is not good at all.

The native will have disharmony, repulsion, unfortunate /unpleasant experience, and a lack of fruitful relationships with those souls/people represented by those planets as char karaka for the native.

The 12th house from Sun is the Marana Karaka Sthana (MKS) from Sun (Taking Sun, AK as reference or Lagna).

In Pachakadi Sambandha, discussed by Shri Venkatesa Sarma in Jyotish classic Sarvartha Chintamani, planets placed in the 6th house are inimical to Sun.

Saturn is especially bad in both the houses: 6th house and 12th house, as Saturn is natural pachaka (digestor or one who can tolerate the wrath of the mighty Sun) of Sun.

It also represents breaking all the boundaries and going beyond conservative limits and doing unconventional in the material world.

Because of this special contribution to breaking all the barriers of Maya, it significantly helps an individual soul to cross the borders and experience the greatest Unknown: The Truth ( Satya, as expressed in Sanatana Dharma); Rahu is a great boon as Atma Karak.

Shri Ramakrishna Paramahamsa has Rahu as AK. In his quest to discover the truth he even tried Christianity and Islam religions along with Hinduism

The final pursuit of all souls is to achieve self-realization or nirvana and merge back to the supreme soul.

Unfortunate placement of Rahu: in Gandanta, Marana Karaka Sthana (MKS: 9th H from Lagna) and other such placements are not desirable for spiritual growth.

5. Atma Karaka (AK) and liberation from the bondage of cyclic time.

We all know that Ketu is the symbol of liberation or emancipation. And 2nd is the house of sustenance. Also, Navamsha (D-9) is the chart of Dharma/ Righteousness.

So when in Navamsha (D-9),  the soul signifying planet, Atma Karaka is placed in the 2nd House from Ketu and sustaining Him (the spirituality in all righteousness) then liberation is sure to come.

4th H is called Hridya bhava (heart) or Gati (distance and time equation, motion). This placement of Ketu, in the 4th house from AK, also gives great motion to the Atma and brings great spiritual upliftment.

Sage Jaimini teaches that: Ketu in the 12th house or 4th house from Atma Karaka (AK) in Navamsha (D-9), indicates liberation from Maya.

I used to wonder and question myself a lot that: char karakas represent soul-level connections. What do they have to do with finances?

After all, it is the body that needs food and material things for sustenance, and to a great extent, it is the mind that is dwelling in Maya and enjoying the wealth and status. Why do we associate the poor Soul with wealth?

After contemplation I realized that: it is Lord Vishnu who governs the char karka. Lord Vishnu sustains and governs our material existence. It is because of Him that we get the food to feed our body.

Without a body, a Soul dwelling in mritu loka is called just an atma (soul + mind) or rather a ghost in common language. So to undergo all the physical experiences the Atma needs a body and cause we live in Maya a mind is indispensable to occupy us in some dwelling, whatsoever.

That is the reason why: if a soul, not looking for such experiences or not in need of close soul mates (dara or partners) does not need wealth at all and he renounces it. Hence all the Dhan yogas, what so ever-present in the chart, get destroyed if Dara Karaka is ill-placed from Atma Karka.

As Maharshi Parasha teaches: Atma Karaka is the king of any chart, hence the decisions of Atma Karka will be the final reality for that native.