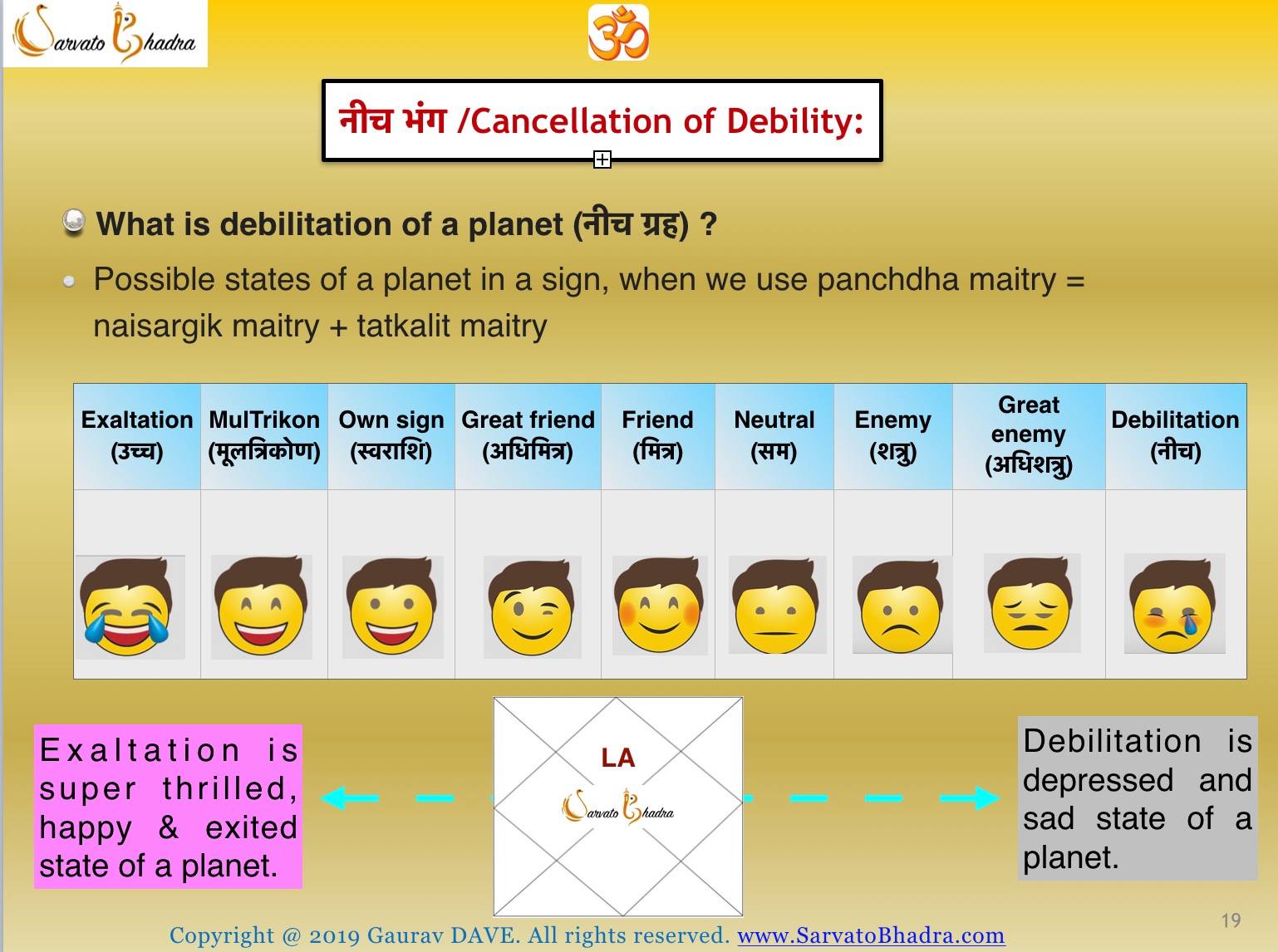 To understand Neecha Bhanga also called Cancellation of Debility of a planet in Jyotish, let us first understand the following.

-What is debilitation of a planet (नीच ग्रह)?

Grahas are moving in their respective paths and doing their karmas as per the directives of Prakrit or mother nature. Lord Shiva is the creator & Goddess Parvati is the manifestation (सृष्टि).

27 Nakshatra creates 12 rashi or signs in Bha-Chakra. 2 &1/4 Nakshatras make 1 sign of 30 degrees each. Signs are environments with certain definitive activities going on. Planets enter in nakshatra/rashi during their motion or they visit 12 signs depending on their motion & speed.

Just as humans have different kinds of relationship with others, based on our makeup, personality, likes dislikes etc, the planets also have similar chemistry among them.

As we feel differently at different places (environments), depending on our character, inclinations, likes, preferences etc in the same way planets also feel the same when they enter & stay in different signs. In some places they feel super thrilled & exited (exaltation) at others they feel depressed and sad (debilitated).

Sun is the king, who owns Leo and he is thrilled to be seated on his throne. Aries represents the throne. Sun gets debilitated at the public place of business & negotiation in Libra.

Kings give orders and do not negotiate with merchants or the common man in a gathering.

-Following are possible states of a planet in a sign, when we use panchdha maitry = naisargik maitry + tatkalit maitry. 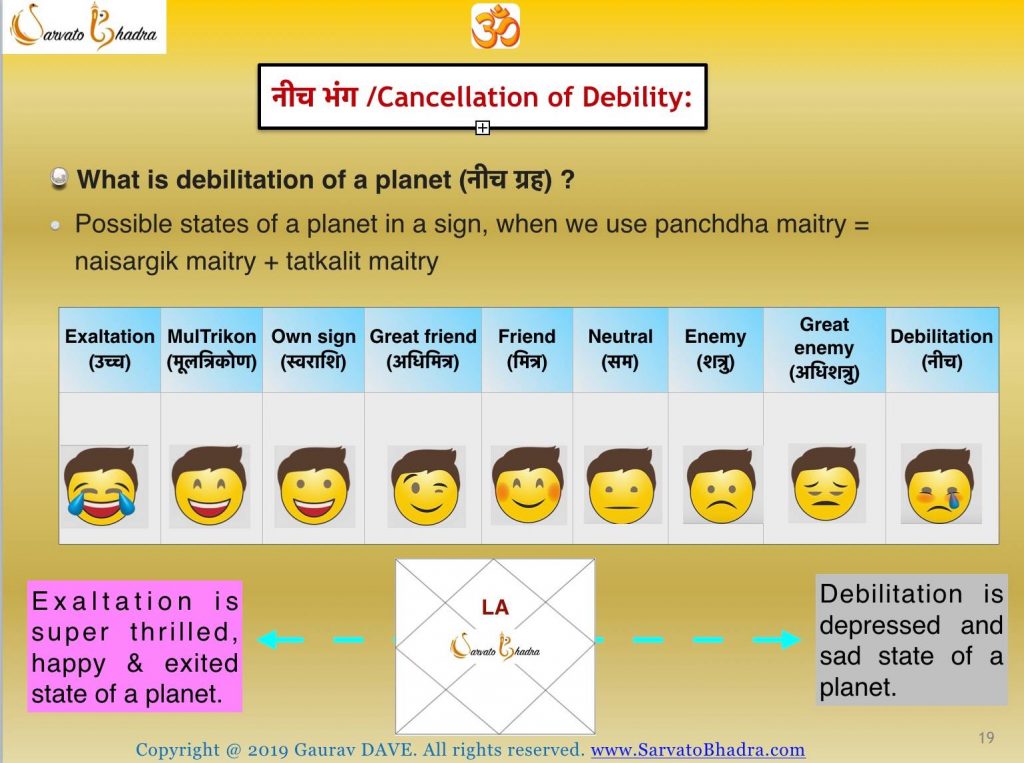 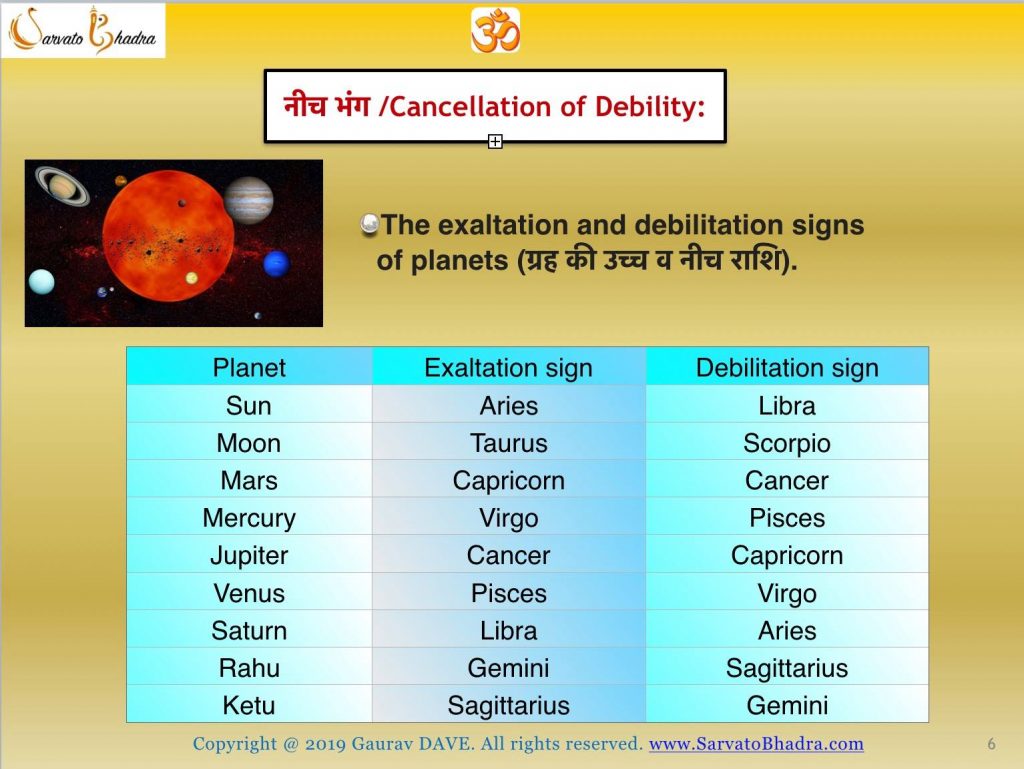 -What is the cancellation of debility Neecha Bhanga(नीच भंग) of a planet?

It means that the planet is saved from his depressed and sad state (नीच) and hence he has some strength and motivation to take care of his responsibilities. Coming back to life!

-How can the cancellation of debility Neecha Bhanga(नीच भंग) happen and who can do it? Is there any role of Navamsha (D9) in Neecha Bhanga?

1. Cancellation of debility (नीच भंग) of a planet can take place in the Rashi Chart (D1). 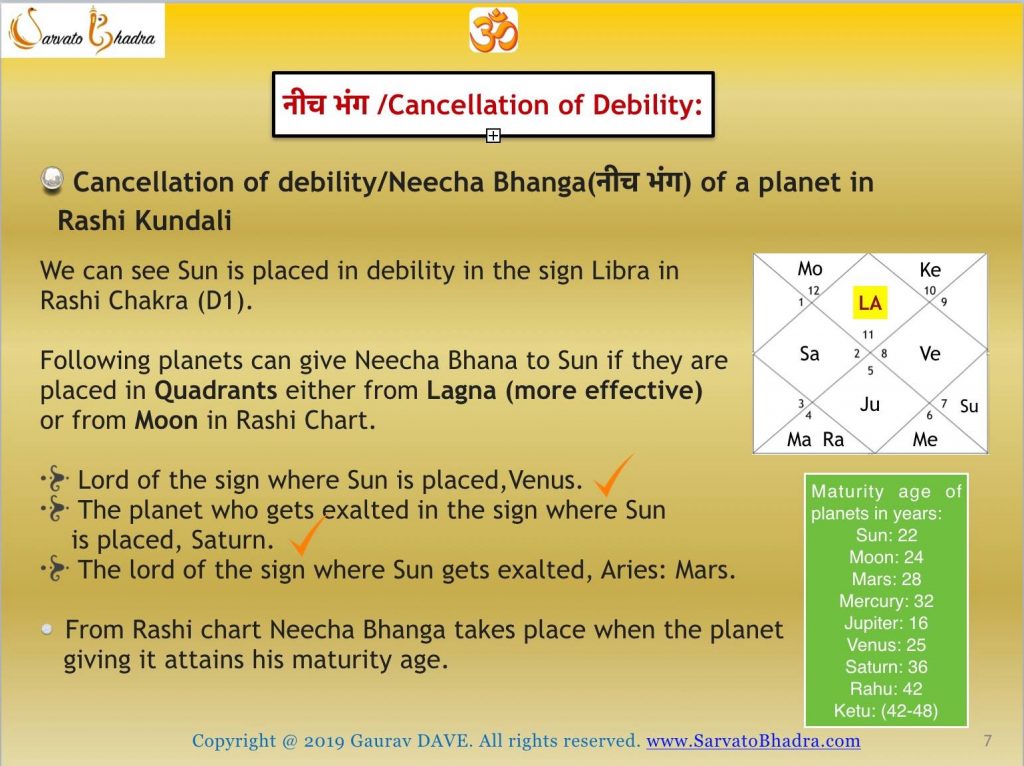 We can see Sun is placed in debility in the sign Libra in Rashi Chakra (D1).

Following planets can give Neecha Bhana to Sun if they are placed in Quadrants either from Lagna (more effective)or from Moon in Rashi Chart.

Navamsha is Dharmaamsha it shows blessing we are getting from Lord Vishnu based on our past karmas. Navamsha shows the quality of the results as suggested by Rashi chart (D1). 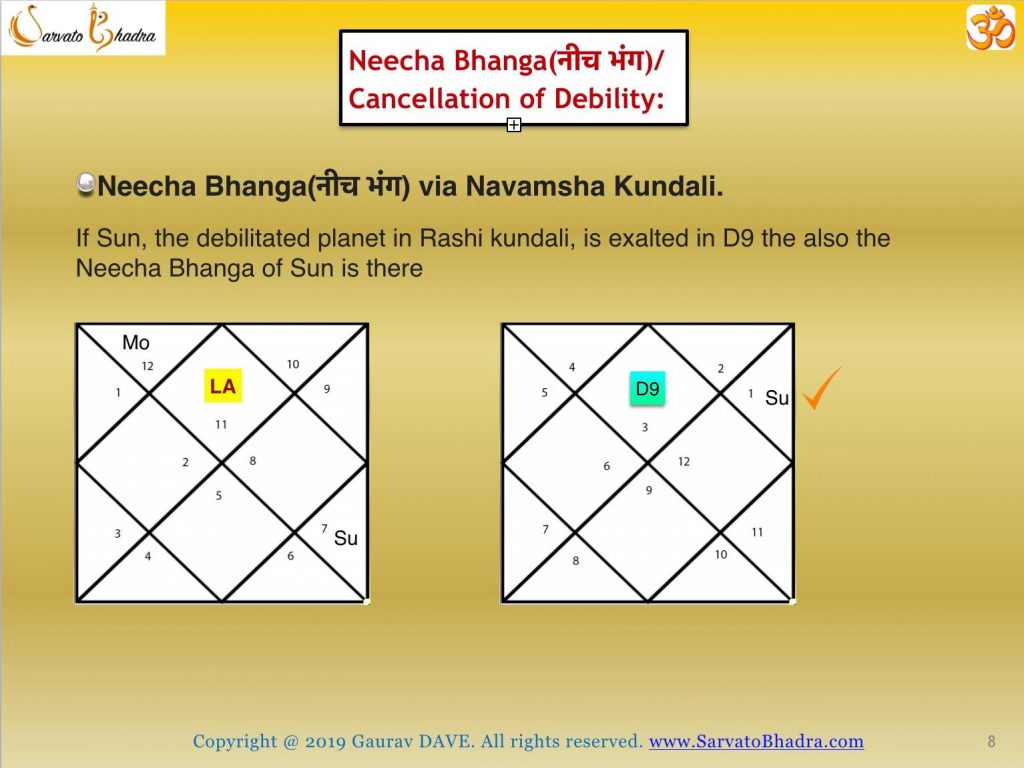 RajYoga is auspicious and prosperous results for native granting success and making him important in society.
Neecha Bhanga only means planet is not in that bad situation anymore. All Neech Bhang (नीच भंग ) should not be called Raj Yoga.

However, if a plant having auspicious agendas for Lagna (owning Quadrant/ Trines), when placed in favorable
house and/or forming auspicious yogas with other planets is a yogada (connecting important Lagnas: Lagna, Hora Lagna, Ghatika Lagna, Shri Lagna, Arudha Lagna etc) when gets Neecha Bhanga will surely give Raj-Yoga. 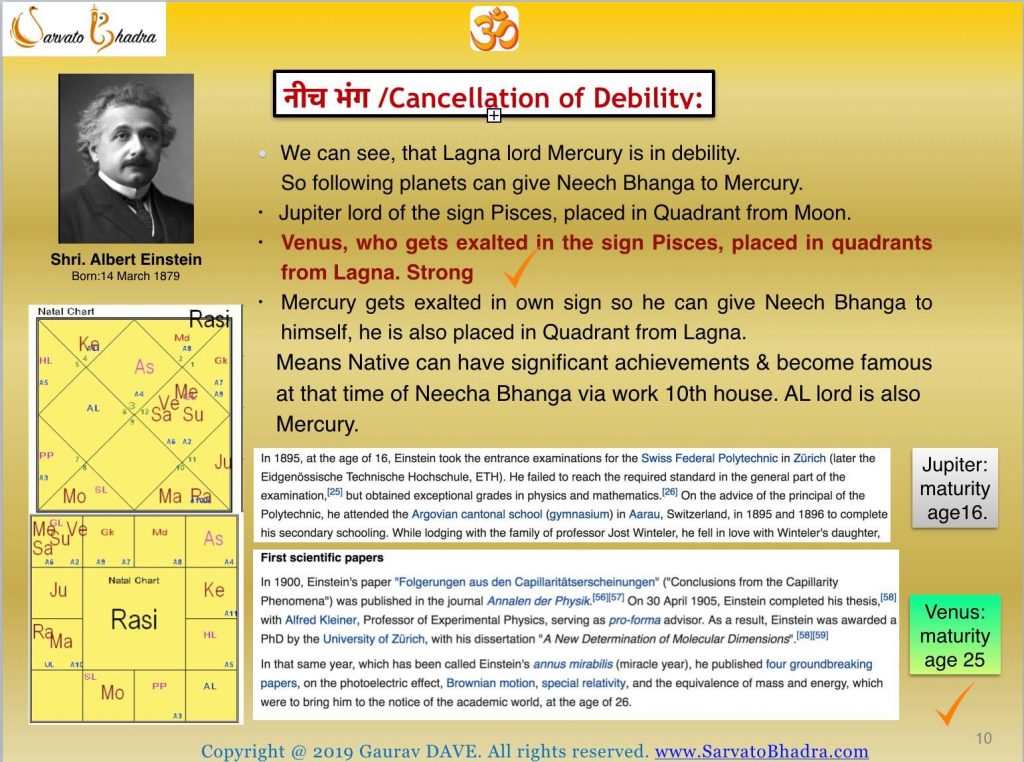 We can see, that Lagna lord Mercury is in debility. So the following planets can give Neech Bhanga to Mercury.

Wikipedia: In that same year, which has been called Einstein’s annus mirabilis (miracle year), he published four groundbreaking papers, on the photoelectric effect, Brownian motion, special relativity, and the equivalence of mass and energy, which were to bring him to the notice of the academic world, at the age of 26.

This Neecha Bhanga of Mercury is triggering the RajYoga to fructify well, for the rest of his life.
1st, 4th, 5th, and 9th house lords have yuti or yoga in the most powerful quadrant,10th house. Mercury, Venus & Saturn have Raj yoga as they lord Quadrant & Trines. Jupiter and Saturn are having parivartana or exchange and are giving Dharm Karmadhipati yoga.